A Goldmine for Your Business

The true 'goldmine' of the small business world is freedom. Freedom in the sense of what America's founders tried to pass on to us - but that freedom is under a deadly attack. 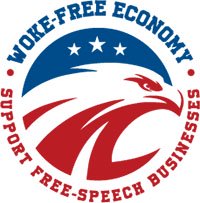 Small business is the backbone of America, and 'woke' attacks on freedom are about to break the country's back. The Small Business Goldmine is your resource for insulating you and your business from this nonsense.

'Wokism': the enemy of freedom

'Wokism' is a warmed-over form of Marxism. It seeks to divide countries and communities along racial lines. It's nothing more than the age-old 'divide and conquer' in a social justice garb, and it is driven by the Chinese Communist Party's 'unrestricted warfare' doctrine.

The unifying tactic of the 'woke' movement is to control free human thought and action by shaming, marginalizing, and cancelling any opposition, resistance, or even criticism. The soldiers of this movement seek the abolition of free speech. In one word, their tactic is censorship.

How does 'woke' censorship affect your business?

Recently, formerly capitalist American corporations have been falling all over themselves to please the CCP so they can get and keep access to the highly lucrative communist Chinese slave labor, consumer, and investor markets.

In return for that access, the CCP forced and continues to force them to accept communist party officials as decision makers in their corporate boardrooms. It's a fact. Look it up.

Seemingly as a result, our homegrown corporate capitalists have outgrown their desire for money. They have that in spades already. Now they want power, and they believe that China's ultra-repressive model of Marxism will get them what they want: absolute power over individuals: you and me.

Put another way, the CCP has figured out how to leverage capitalism with its built-in desire for profit maximization in order to promote and institute communism on a world-wide basis, but especially in America.

As a direct effect of this communist-driven leftward lurch of our corporate boardrooms, our entire economy has gone 'woke' - and since a country's economy is inseparably intertwined with its polity, society as a whole is rushing headlong in that direction.

What stands in their way is what's left of the original America. Specifically, American's middle class. Again: you and me.

Most of us either are now working, or have once worked, for some big American corporation, and the vast majority of these corporations have gone hopelessly woke. Any employee who speaks their mind gets fired. Any company who doesn't follow their Marxist lead gets canceled (think "My Pillow").

Woke corporations are also major funders of leftist politicians' reelection campaigns, and they supply the majority of so-called talent to top administrative positions in government. In other words, the "deep state."

Finally, woke corporations are major financial donors to Marxist organizations like BLM, the Sunrise Movement, and many, many others.

How can they be defeated?

If wokism has permeated every aspect of our society, how can we defeat it? By simply sidelining all of their efforts in a peaceful, but very purposeful, organized, and effective way.

Join us in creating this new, parallel, woke-free economy. Let the wokies be wokies. Let them serve their CCP and corporate masters. We withdraw our participation in their corrupted system - while building up our own.

Freedom and 'wokeness' are incompatible.

Freedom is from God. 'Wokeness' is from hell.

Those who attach themselves to it live in a separate reality, but reality does not change just because some wokie snowflake wants it to.

People didn't create the world, and neither did some cosmic explosion in the distant past. God did, and the evidence is all around us. You just have to look at it, instead of turning the other way.

God gave us freedom, and freedom is the bedrock of any small business. The freer, the better.

You know best how to run your businesses. You don't need government or some corporate conglomerate to tell you.

But you need a woke-free population and economy to advertise to, to sell to, to buy from, and do business with.

How to get it done

What we are telling you is that there is a way to fight back and literally push the wokies' machinations out of contention.

Let them rule (and ruin) their co-opted, subverted economy. We build up our own!

That, of course, sounds like it's easier said than done - but only if you don't have the right tool.

The good news is: we now do have the right tool.

Our tool is a business directory for freedom-loving American business owners and consumers.

If you love freedom, you love America. If you hate freedom, you hate her. We buy from, sell to, and do business only with each other, whenever and wherever possible. How do we find each other? Through the WokeFreeEconomy.com

In doing this, we kill two birds with one stone: we drain the power of the 'woke' establishment and build up our own!

Help us, help yourself, your family, friends, neighbors, and country to build this directory out. As we build out this parallel economy, we build our community of free speech loving Americans - locally as well as nationwide.

Do you know who in your neighborhood is a patriot? Do you know what businesses in your area are owned by patriots? How can you find out?

So far, you couldn't, but now you can.

Once built out, you will have access to a market of over 100 million committed American freedom lovers.

The more listings, the more businesses, the more opportunity and the more freedom - and listings are cheap. Very cheap. Dirt-cheap, in fact.

You will be able to tap the huge, but so far untapped market of freedom lovers. The woke-free market. The woke-free economy. There are far, far more than just a 100 million of us. We just never knew how to find each other before - but we do now!

Promote us to your friends and neighbors.

Your country will thank you for it.

(NOTE: We are intentionally avoiding any promotional efforts through the major legacy and social media. This is a "whisper campaign." We grow by word of mouth and through alternative channels - just to show the woke media giants how weak they are and how strong we are.)

We are the ones who have the numbers. All they have is 'power'. Ill-gotten power, that is.

It's time to take it all back.